The tuna is one of the most economically important fish in the world; hundreds of thousands of tons are taken by commercial fishermen worldwide every year. This species has a wide range: it’s found in a thick band around the equator throughout the world, inhabiting warm seas from the US-Canada border latitudes in the north to Australia in the south, and frequents depths from the surface down to 100 fathoms – a full 600 feet. They visit the waters around Curacao mostly during the winter months.  Yellowfin tuna are heavy-bodied silvery fish with blue-black backs, white-spotted bellies and bright yellow dorsal and anal fins. They sport saw-toothed rows of yellow finlets from those fins to the tail on top and bottom, as well as a broad yellow stripe from eye to tail on their sides. They can get up to nine feet long and 400 pounds, and the smaller ones are often confused with a close relative, bigeye tuna. These heavyweights of the deep are eating machines, chowing down squid, skipjack tuna, smaller yellowfins, mackerel, pilchards and crustaceans at a prodigious rate. A yellowfin that is 18 months old can weigh eight pounds; a four-year-old can be as big as 140. Fish in the 90-100 pound range are common in Curacao.
Their sport fishing value is also high: their speed and fighting ability, their sheer size potential, and their palatability have made them a favorite game fish among saltwater sport anglers. Add that to the fact that they’re common, easy to find, and eager to take a hook, and you’ve got a prime candidate for a Curacao fisherman’s favorite.

You gear and bait

Yellowfins are fierce fighters; even small yellowfins can put a strain on our gear. We at Fish Charter Curacao  use a 50-pound class, two-speed trolling reel (such as a Shimano TLD 30 II or TLD 50 II LRS), a broomstick-thick rod, and line in the 25-50 pound test range at least. Expect the fish, whatever its size, to test your gear’s mettle, and yours as well. We need to use strong leaders, and if you opt to use live or dead bait, you’ll need huge No. 9 or No. 10 hooks (about 3 inches long, and wickedly barbed) baited with squid, skipjack, mackerel, ballyhoo, or other baitfish. Yellowfins will also go for artificial lures, some of which are larger than most freshwater fish. We use plastic squids behind a bird like teaser to draw them up.

How to catch a big one

If you’re serious about catching yellowfins in Curacao then you have to venture out to Klein Curacao. Where they can sometimes be spotted from far away, because they cause a lot of surface disturbance. Although the larger fish may be loners, they usually feed messily at the surface in large schools; one observer has said that a feeding yellowfin school looks like “a fish blender.” Often seabirds will be hanging around above them, taking advantage of the scraps, so their presence can be a strong indication of feeding yellowfins. However, you’re more likely to find them in the company of dolphins (the mammals, not the fish). Yellowfin schools often hang around below pods of dolphins, making it difficult to net them without catching the dolphins too. This is why commercial yellowfin fishermen rarely use nets nowadays. 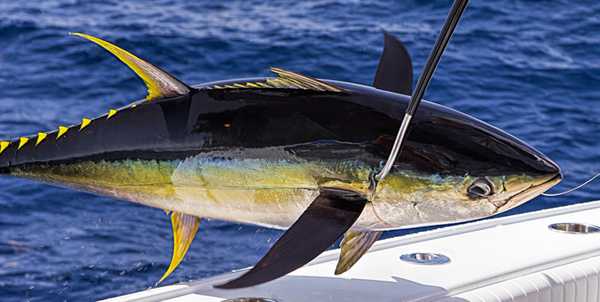 Tuna usually bite better in low lighting conditions, especially if they’re not feeding at the surface, so late afternoon is a good time to go after them. Once you’ve located your prey, you can try two popular methods: drift fishing or trolling. Drift fishing uses cut bait, some of which is thrown into the water as a “chum line” to attract their attention. This is called “chunking.” You can also cast with live bait. Whatever your method, if you decide to go with live baitfish, hook them sideways through the nose, under the dorsal fin, above the anal fin, or through the breastbone. You can also try trolling at slow speeds (5-9 mph) using either live bait or artificial lures, such as strip baits, large spoons, skirted lures, and plugs. Don’t worry – the tuna are more than fast enough to keep up with the boat. When you troll, you should let out a quarter of your line behind the boat; a hundred yards or more is excellent.

When yellowfins hit, they hit hard, usually hooking themselves with no help from you, and yanking the line off the reel at a rapid rate. If the line becomes slack, the fish is probably swimming toward the boat; reel in the slack rapidly, and make sure the hook is set. Always keep the line tight. A truly large fish might give you the fight of your life, battling for as long as several hours before it wins – by snapping the line or leader – or you do, by getting it up to the boat. If it’s a relative small fish, you can probably lift it over the side yourself; it it’s a truly large specimen, we use a gaff, a stout curved hook on a heavy pole. The gaff is hooked into the gill slits or the side of the fish, and the fish is hauled aboard. The really big ones might require several gaffs and several people to bring them on board.

Yellowfin make great eating. Whatever you decide to do, get your yellowfin on ice right away so it stays fresh for either your filleting knife or the taxidermist’s. If you decide to eat the fish, you should bleed it by making six-inch slits on either side and let the blood drain out before icing it. Yellowfin tuna is a firm, dark-red meat with a strong flavor, and tastes mighty good whether it’s cooked or eaten raw. Although it’s not held in as high regard as bluefin tuna, the Japanese adore yellowfin for sushi or sashimi and most of the best yellowfins caught commercially are snapped up on the docks by Japanese buyers. Hawaiians also favor yellowfin, which they call ahi, and eat it both cooked and in a spicy, sushi-like dish called poke (pronounced pokey). Because it’s so versatile, it can be prepared as steak fillets, broiled, fried, baked, you name it. We always have Soy Sauce onboard and we often cut up the caught tuna for Sashimi for our guests. You can’t get it any fresher than that.