Marlin fishing is considered by some game fishermen in Curacao to be the pinnacle of offshore game fishing due to the size and power of marlin and the relative rareness and vulnerability of this species. In the past, before the way was eased by modern technology, it required skill to capture or kill marlin.

Fishing styles and gear used in the pursuit of blue marlin vary. We in Curacao mostly use 50lbs class reels and 50/80 lbs rods The Curacao marlin here average around 200 lbs. The main methods use atrtifical lures, rigged natural baits, or live bait.

Blue Marlin are aggressive fish that respond well to the splash, bubble trail and action of a well presented artificial lure.

Probably the most popular technique used by blue marlin crews worldwide, artificial lure fishing has spread from its Hawaiian origins. The earliest marlin lures were carved from wood, cast in drink glasses, or made from chrome bath towel pipes and skirted with rubber inner tubes or vinyl upholstery material cut into strips. Today, marlin lures are produced in a huge variety of shapes, sizes and colours, mass-produced by large manufacturers and individually crafted by small-scale custom makers. 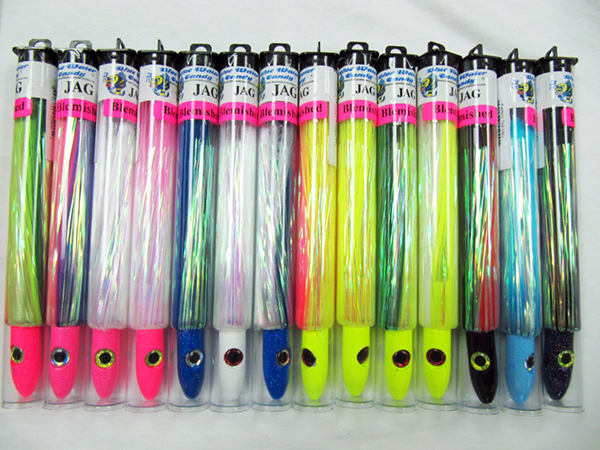 A typical marlin lure is a small (7-8 inch), medium (10-12 inch) to large (14 inches or more) artificial with a shaped plastic or metal head to which a plastic skirt is attached. The design of the lure head, particularly its face, gives the lure its individual action when trolled through the water. Lure actions range from an active side-to-side swimming pattern to pushing water aggressively on the surface to, most commonly, tracking along in a straight line with a regular surface pop and bubble trail. Besides the shape, weight and size of the lure head, the length and thickness of skirting, the number and size of hooks and the length and size of the leader used in lure rigging all influence the action of the lure: how actively it will run and how it will respond to different sea conditions. Experienced anglers can fine tune their lures to get the action they want.

Lures are normally fished at speeds of between 7.5 to 9 knots. These speeds allow quite substantial areas to be effectively worked in a day’s fishing. A pattern of four or more lures is trolled at varying distances behind the boat. Lures may be fished either straight from the rod tip (“flat lines”), or from outriggers.

Rigged natural baits have been used by sport fishermen seeking blue marlin since the 1930s and are still popular. In Curacao we usually use flying fish or ballyhoo as bait. Rigged natural baits are sometimes combined with an artificial lure or skirt to make “skirted baits” or “bait/lure combinations”. 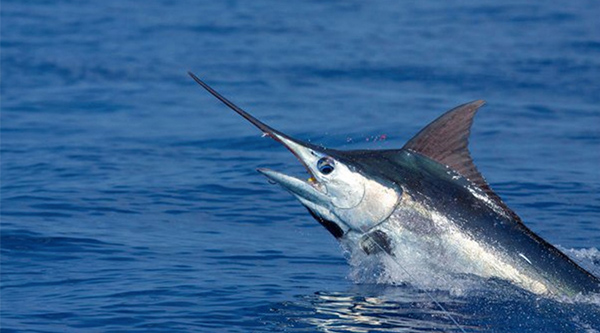 Live bait fishing for blue marlin normally uses small tuna species with skipjack generally considered the best choice. As trolling speed is limited by the fact that baits must be trolled slowly to remain alive, live-baiting is normally chosen where fishing areas are relatively small and easily covered. Much live-baiting in the blue marlin fishery Curacao, takes place near FAD (Fish Aggregation Device) buoys and in the vicinity of steep underwater ledges.