The wahoo is the second fastest fish in the worlds oceans and a ferocious predator. In Curacao we call it Mula. It can reach speds upto 60 miles per hour and therefor you know when a wahoo hits your bait because that first run is super fast. Our record now stands at 31 kilo caught in February 2015.

The body is elongated and covered with small, scarcely visible scales; the back is an iridescent blue, while the sides are silvery, with a pattern of vertical blue bars. These colors fade rapidly at death. The mouth is large, and both the upper and lower jaws have a somewhat sharper appearance than those of king or Spanish mackerel. Specimens have been recorded at up to 2.5 m (8 ft) in length, and weighing up to 83 kg (180 lb). Growth can be rapid. One specimen tagged at 5 kg (11 lb) grew to 15 kg (33 lb) in one year

Wahoo tend to be solitary or occur in loose-knit groups of two or three fish, but where conditions are suitable can be found in schools as large as 100 or more. Their diet is made up of other fish and squid. Double or even triple hits from wahoo occur in Curacao and cause absolute chaos on the deck. 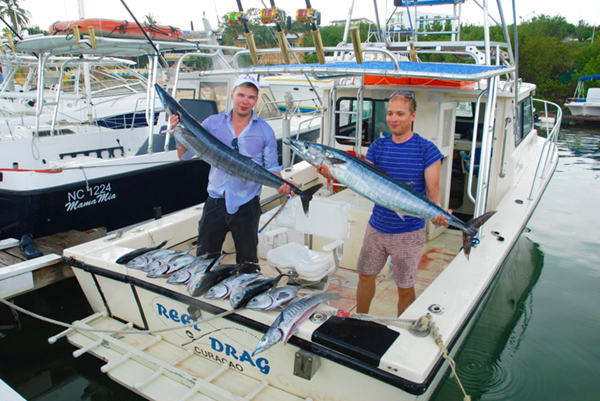 The flesh of the wahoo is white, delicate, and highly regarded by many people. They are the most common biggame sport fish caught on our charters in Curacao. We can catch them year round but the best time is in December and January. Fast trolled tuna skirts or whole skipjack tunas are their favorite.